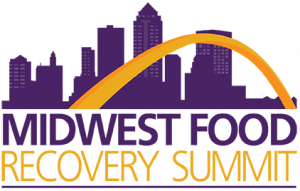 In planning and implementing the 2017 Midwest Food Recovery Summit, the IWRC knew we wanted sustainability to be at the forefront of our efforts. For two-and-a-half days in September 2017, attendees came from 18 states, from the West Coast to the East Coast, and even from Ontario, Canada, all to focus on reducing, recycling, and recovering food waste. In bringing so many people together for a multi-day event, we knew we wanted to implement sustainability measures into the core of the event so are six ways you may or may not have noticed those efforts at the summit.

While the summit was in its planning stages, we brainstormed ways to keep everyone informed in a sustainable and efficient way. We decided to ditch the traditionally printed conference booklet entirely and go digital using a mobile application. It was a great way to reduce paper that would end up in the recycling bin or even worse, the trash. It also allowed us to share a large amount of information to the palm of each attendee’s hand, have a live poll during the Innovator Lightning Round and gave attendees the opportunity to rate sessions without needing paper. 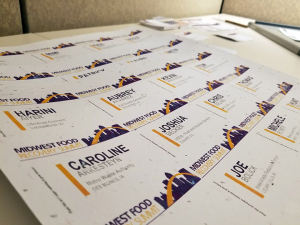 Did you happen by chance to take a closer look at your name tag? The name tag material is called seed paper. This plantable paper is regular paper, but has been infused with seeds of either carrots, lettuce, or tomatoes!. So attendees are able to plant their name badges and grow their own vegetables in the backyard. 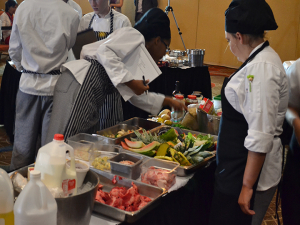 As the summit was created to educate about food waste, it is only fair that there be a no food waste policy. This was a primary focus when we began looking at venues and the Des Moines Marriott Downtown hit the mark. They had already implemented source reduction and donation strategies into the kitchen, plus they were working with an Iowa-based hauler, GreenRU, to collect their food scraps for compost. Additionally, with the plans for Saving Scraps: A Culinary Competition in place, we needed food. Instead of placing orders for food to be used in the competition, the Des Moines Marriott Downtown was more than willing to help save food scraps. Not only did they save excess food and scraps directly from the summit meals for the students to use, but they also saved food from the previous weekend when a wedding was held at the venue. 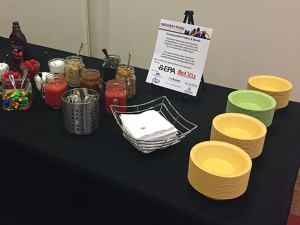 When serving meals, we did not want styrofoam or plastic to be used and luckily, the Des Moines Marriott Downtown already used non-disposable plates, glasses and metal silverware. It not only gave the conference a very formal feel, but it also took the place of dinnerware that would inevitably end up in the garbage. 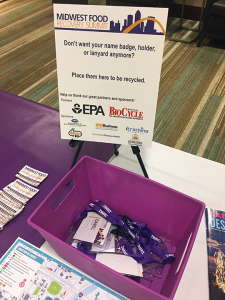 Throughout the entire facility, there were recycling containers alongside the compost bins. Any paper products that were being used could easily be recycled instead of ending up in a landfill. All of the signs, banners, papers, etc. that were used during the summit were made out of material that can be recycled or reused. And for those of you that left behind your badge holder and lanyard, thank you! We'll be able to use those at future events.

If you're planning an event, we highly suggest really looking at the materials you're using to see if there are alternatives you can use in order to reduce less waste.